GRE at home – An experience 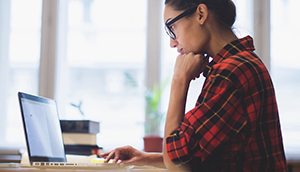 Written by Ramla Malik – a student who took GRE at home.

Q1: How did you register your GRE at home, was it different from the simple registration process?

Since I had initially registered for the GRE at center test, I simply logged into my ETS account, and went to my ‘Upcoming Tests’ Tab. There, next to my previously scheduled test (for the 12th of May) was an option to ‘reschedule appointment’. I was then directed to an option of choosing the GRE at home. Later, I received an email through which I created a ProctorU account and then chose my preferred date and time. If this process doesn’t work, you can live chat with the customer service providers at ETS. They’ll help you out and will even reschedule your test for you if you wish.

Q2: Did you initially register for at center and later got it changed? If yes, what was the procedure for changing?

Yes, I originally registered for my test that was to take place on the 23rd of April. Due to the situation, my test was postponed and I rescheduled for 12th May. When my second test was also cancelled, I registered for an at home test.

Q3: List the problems that you faced or the mistakes you made while taking the GRE at home. Please add your suggestions to overcome them.

1) My first mistake was that I did not ask my proctor if I could keep some snacks with me, which in hindsight was a bad idea. So do make sure to ask your proctor if you can keep something to eat with you, because you might need something to boost your energy during one of the breaks. I did ask about keeping a water bottle with me, which was allowed.

2) I took my test at a neighbor’s house because their internet speed was better than ours, but unfortunately, I didn’t know that their UPS only supported one light in the room I was taking the test in, when the power went off. Thankfully, the power was only gone for a few minutes, but I could barely see my white board in the dim light, and I was afraid that the proctor may raise an issue regarding it. Fortunately, the proctor didn’t say anything. But I would advise test-takers to make sure that their room stays well-lit even in a load shedding situation.

3) During my last section, my laptop ran out of battery. Since the power situation happened during the same section, I had already lost precious minutes. Since I was instructed to clear my table before the test, my charger was not right next to me and I had to get out of my seat to go fetch it, which I was technically not allowed to do. Still, I got up, waved my charger in front of the camera so the proctor could see it and plugged in my charger. The proctor did not comment on the situation at all. However, it is better to keep your charger plugged in from the very beginning of the test, or at least during the ten minute break, to avoid such a situation.

4) When I completed my test and proceeded to submit my scores, I conveniently forgot the institution code for USEFP (which I needed since I am applying for Fulbright). I ended up having to Google the code, but I was a little apprehensive about doing so, because I wasn’t sure if I still counted as being in an ‘examination situation’. The only way to avoid this is to remember the institution codes of the universities you are applying to.

Q5: What did you use for calculation/rough work? What are your suggestions about it?

I used a small whiteboard, which was quite convenient. For the quant section, erasing your rough work after each question did take up some time though. Make sure to use a small white board instead of a full-sized one, because it will be easier to handle and adjust.

Q6: How did the proctor check you online (e.g. they check your hair, ears, etc. in centre) what procedure was followed for GRE at home?

The proctor asked me to show her the room I was sitting in, the table top surface where I was to put my laptop and beneath the table. She also asked me to use a mirror to show her my laptop itself. I was also asked to pull up sleeves and display my forearms as well as to take off and show my glasses. I wear a headscarf, which I was told to push aside and display my ears. I was not asked to show my hair. Once the checking was complete, I was allowed to cover my ears again.

Q7: Did you feel any difference in difficulty level in GRE at home as compared to mocks or actual GRE (If you have taken it before)?

I have not taken the GRE at a center before so I cannot compare to that experience, but the test was definitely more difficult than all of the mocks I have taken, including the Manhattan Diagnostic, Barron’s diagnostic, Kaplan Test and the ETS official practice tests.

Q8: How many sections did you get in total? – e.g. GRE has standard 6 sections, one AWA, two quant, two verbal and one research/unscored section.

I got 1 AWA, 2 verbal, and 3 quant sections. The pattern and interface was exactly the same

Q9: Were you allowed to leave during the ten minute break? What was the procedure followed for resuming the test?

I did not specifically ask my proctor about leaving my seat, but the written instructions before the test did indicate that I could leave my seat during the 10 minute break, but not during the 1 minute breaks. I myself did not leave my seat because I didn’t feel too well, but according to the instructions, if I had left, I would have had to display my room, table top, forearms and ears again.

Q10: A summary of your experience.

Overall, my test at home experience was very pleasant. The proctor was friendly and cooperative and I didn’t face any major complications. I had heard that the test at home usually takes longer than the normal test due to excessive checking, but that was not the case with me. My test started at 10 AM and finished at around 2 PM, which seems to be the standard time for the test. The format and layout of the test was exactly the same as had appeared in the mocks, so it wasn’t difficult navigating through it.